The Story of Redeemer Lutheran Church

Ever since Lutherans began moving into the city of Jasper, the possibility of organizing a Lutheran congregation was raised from time to time with the various Lutheran Synods in Indiana.  Nelson Angerer had written the Wartburg Synod requesting that a congregation be organized.   Kenny Weisheit and Delbert Meyer, of St. Paul Lutheran Church, Haysville, had asked the Synod President to consider it.  Surveys were made in the city by Rev. George Hoog in September of 1960 and they were very encouraging.
The possibility became a reality in March of 1962, when the Indiana Synod of the United Lutheran Church in America sent the Rev. Fred Fiedler to begin organizing the Jasper Mission.  A steering committee was formed with Clarence Harder serving as Vice Chairman, Mrs. Merna Board as Secretary and Mr. Delbert Meyer as Treasurer.    A parsonage was purchased at 818 E. 15th St. and it was decided to have Sunday Services at the National Guard Armory in Jasper until a church could be built. The first worship service of the church was held on April 29, 1962, with 110 persons in attendance.   A Hammond electronic organ was purchased and a church office was set up in the Armory.  Rev. Fiedler began issuing a newsletter for the  church entitled, “The Voice of Redeemer.”  It was very helpful in keeping everyone up to date on the progress of the church.  Sunday Church School began on May 13 for all children aged 2 and up, and for all adults. 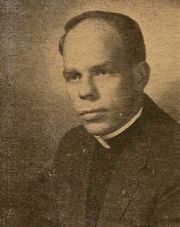 Charter Sunday was held on June 24.  At the service that morning, the Charter for the congregation was opened for signatures for the first time.  All those who wished to become members of the new congregation had the opportunity to sign their names. The charter was open for signatures until Sept. 9.

Plans were made for the organization of a Luther League for the youth of the church.  In September, the Luther League was organized with the following officers:  President – Linda Fuhrman, V. President - Euline Kieffner, Secretary - Rosemary Brown, and Treasurer – Fred Buchta.

The Lutheran Church Women organized in December with the following officers:  President – Mrs. Clarence Harder, V. President – Mrs. Edwin Buchta, Secretary - Mrs. Bobbie Armstrong and  Treasurer – Mrs. Robert Ruckriegel.
The church was formally organized at the September 9 services .  Rev. George Hoog, Assistant to the President of the Synod and Director of Home Missions brought the message.  On that afternoon Rev. Richard Langsdale was the guest  speaker at the 2:30 pm service.  A guest choir composed of members of neighboring congregations sang.  Photographer Jim Hoffman was on hand to take pictures of this most important day. The charter was signed by additional members.  The total number of the membership was 76 adults and 50 children.  A total of 326 attended the organizational services. 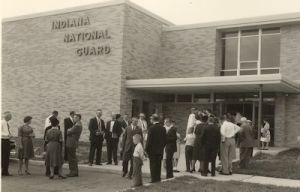 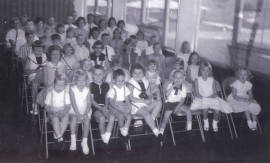 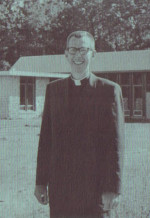 A call for the first pastor of Redeemer was sent in December to Rev. Ronald Schoo.  He accepted the call and he and his family moved to Jasper in March, 1963.    Efforts began to find a suitable site for a church building.  Members of the Site Committee were Edgar Fuhrman, Nelson Angerer, Charles Kieffner, Edwin Buchta, Herb Grabeman with Rev. Schoo as the advisor.  The present property on East 32nd Street was purchased on February 16, 1964 from Mr. and Mrs. Claude Line.  The site was paid in full on March 31, 1966.  A new Kimball organ was purchased in November, 1964 and the old organ was sold.

Mr. Charles Gardner of Routt & Associates of Vincennes was selected as the architect and the master building plan was approved in August 1965.  Construction began with groundbreaking on March 27, 1966.  The church was dedicated in a special service on October 23, 1966.  This first unit was to serve as a sanctuary until the larger church could be built.
Rev. Schoo guided Redeemer in our first years and remained pastor until October, 1969 when he accepted a call to St. Matthews in Paducah, Kentucky.  A call was issued to Rev. Leonard Koss and he became our second pastor.   He was installed on April 12, 1970.   The Good Samaritan Day Care Center asked to rent the classrooms at Redeemer for two hours each weekday morning.  It was approved. Pews were obtained from St. James in Holland and were rebuilt and refinished in 1971. 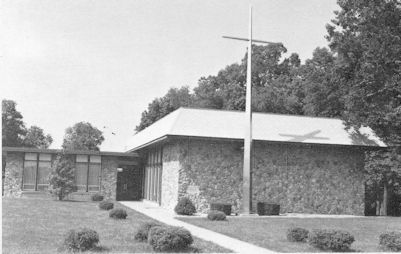 In 1972 we celebrated the 10th Anniversary of Redeemer.  Rev. Schoo and Rev. Fiedler were on hand to take part in our festivities.   In 1974 dividers were made for the cordoning off of Sunday School classes and individual mailboxes were installed for members.  The indebtedness of the church was refinanced through the sale of General Obligation Bonds in 1976 and in 1977, Redeemer Church was no longer a mission church, but was self-supporting.  A new Rogers 145 Organ was purchased. 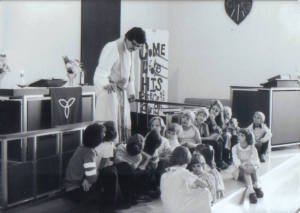 Pastor Koss resigned August 6, 1978, and in 1979 Rev. Michael Wonderlich became our third pastor. He moved to Jasper in April.  The parsonage was sold and the proceeds invested to provide a housing allowance. .  Pastor Wonderlich and his family moved into a house on MacArthur St. in Jasper. We began using the Lutheran Book of Worship at this time.  Around this time, we began using lay readers in our Worship Pastor Wonderlich resigned on August 2, 1981 for graduate study in family counseling. 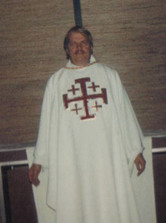 The Rev. Dr. George Muenich became our next pastor in November 1981.  Various improvements were made in the facilities.  A sacristy cabinet was added.  Reflecting an emphasis on worship, a processional cross and torches and new paraments were made.  A chalice and paten, candelabra and missal stand were purchased and the singing of the psalms and other settings of the liturgy were introduced.  Holy Communion was celebrated at every worship service and First Communion for children was established.  Erika Muenich became our organist at this time.

Regular services of Holy Communion on Saturday evenings were begun in April of 1983 with the assistance of Pastor John Pavelka. who had retired from active ministry and was serving as the Director of Child Protection Services in Dubois County.  The last of the debt was retired in November 1983.  Our Carillon of Bells has been ringing the hours and calling us to worship since Easter, 1985.  Aluminum sheathing over the exterior woodwork and thermal-glass windows in the nave were installed in November, 1985.  As our Saturday night services grew, Rev. Gabriel Baumgartner assisted Rev. Pavelka in officiating.  Pastor Muenich resigned Nov. 30, 1990 and accepted a call to New York City.   Rev. Dennis Jackson became our fifth pastor on Oct. 20, 1991.
Our Sunday School space needed to expand and many discussions were held about possible solutions. Our educational wing was updated and individual classrooms were made.  In 2001 the new classrooms were rededicated. 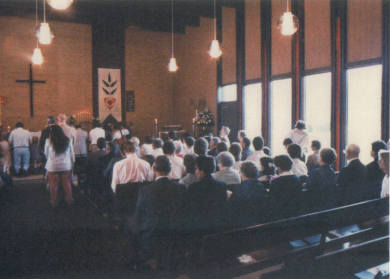 Worship in the old sanctuary, 1980s 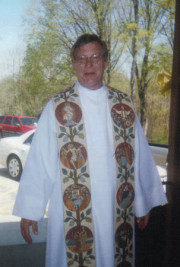 Pastor Jackson resigned on January 30, 2000.   Rev. Andrews and Rev. Karen Husby served as our interim pastors.  On Feb. 24, 2002 Pastor David Trexler became our sixth pastor.  This began an era of much growth and activity at Redeemer.  Pastor Trexler began doing the Saturday night services, relieving Rev. Pavelka, who had served us faithfully.  In March of 2002, Pastor Trexler began the Dial a Story program, where anyone could call in and receive an inspiring short story each day.  It was very successful.  We started printing the entire service (hymns included) in the church bulletins.   A new sound system was installed with individual hearing sets available to members included.  We purchased a new computer and new copier.

We participated in the Food Drive for our local Food Pantry and in a competition between the area churches, Redeemer collected more food than any other church, although we are a smaller congregation than many of the other churches..   We also donated coats for the Koats for Kids program locally and our youth took part in the Read to Feed program.
A building committee was formed in February 2003, and plans began to take shape for a new church.  Members serving on this committee were: Carol Keller, Ron Klem, Nancy Otte, Greg Schnarr, Alan Gramelspacher, Doug Nordhoff, Jim Seitz, Becky Schmitt, Brenda White, and Troy Sherouse, assisted by Jon and Chris Schnarr.  A capital fund drive was started and adjoining property was purchased.   On  Palm Sunday, 2004 a groundbreaking was held for the new building and the dedication of our new church took place on November 21, 2004.  We are all so proud of our new church.  It is an octagonal design.  We now have a large narthex for gathering.  A new baptismal font was installed with a continuous flow of water. It was given in memory of Martha Schlicting and Erika Chestnut.   Pastor Trexler resigned on August 10, 2007 and accepted a call at Highland, IN. 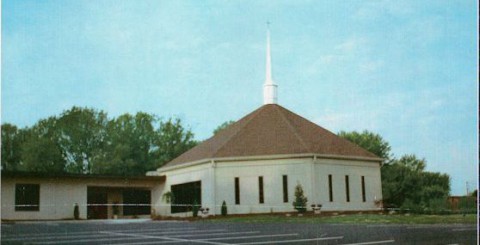 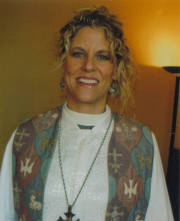 Three pastors served as interim ministers during this time.  They were Rev. William Andrews, Rev. Jennifer Faust and Rev. Gretchen Enoch.  Pastor Gretchen became our full-time pastor in January 2009.  She served until January 2011. We again had an interim pastor, Rev. Jennifer Owen.  In   2011 a call was issued to Rev. Adam Ruschau and he accepted.  He began serving us in November 2011. 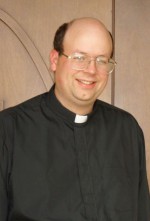 Redeemer has an active Adult Choir with approximately 15 members.  Jeff Mann is our director and Greg Schnarr is our organist.   Greg has been our church organist for several years.  We have provided Easter dinners for needy families and and gifts for the Crisis Connection project.
We have a regular Sunday School for the children and an Adult Sunday School class.  Our young people who are taking instructions for Confirmation meet regularly and also enjoy social activities, such as movies and joining with other youth from different congregations.  We encourage our youth to attend an ELCA summer camp by providing financial help to them.  We participate in the ELCA Malaria Campaign and we have a Fifth Sunday fund that helps local families with emergencies, utilities and rent.

In 2012 we made plans to celebrate Redeemer’s 50th Anniversary.  We planned many activities for this year.  We celebrated Redeemer’s first worship service on April 29 by using the same liturgy, hymns, and readings from 50 years ago. In June we celebrated Charter Sunday with an outdoor worship service and picnic.  We concluded our celebration with a special worship service and meal on September 9, which was the date the congregation was officially organized in 1962.  Rev. Wonderlich was our guest preacher.
To all our members we credit the many gifts and deeds of love to their Redeemer, which have made the church that bears His name a living reality.  We thank God for all his many blessings we have enjoyed in our fifty years of worship.  At Redeemer we shall strive to continue to follow our mission statement, “To live life abundantly through the worship of God and service to others.”

(Holy Communion is typically celebrated at all weekend worship services)